Valeri Bocage started Powerful Women International (PWI) by way of loosing everything she had when Katrina struck New Orleans. She ended up in Dallas and eventually San Francisco where I have been living since 1977. 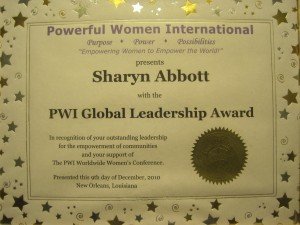 Six months ago Valeri called to tell me I had not only been nominated, but had won the Humanitarian Award from PWI. She asked me to attend her annual even held in New Orleans where she and Pam Terry would be honoring several women who are making a difference in the world.

I got in on Thursday evening and went up to the 22nd floor of the Marriott Hotel on Canal Street. There were about 40 people in attendance. Several of the women brought their husbands, boyfriends and sons.

It was a pleasure to be associated with so many incredible women who make it their life purpose to make a difference in the world. I was literally awe struck by the initiative and fortitude these women possess. Some born from tragedy such as Ella who lost her son to renal failure when he was 24 and has dedicated her life to not only helping other families facing the same challenges, but she’s created a home for children in Africa who have HIV/AIDS; another , Evelyn who has been tirelessly working to help the kids at risk in New Orleans; Alpha who left her 17 year job comfort to go out into the community in the San Francisco Bay Area and make it easier for the kids at risk to find a way to survive and the list went on and on. By the end of Friday’s event, I felt so grateful to have been a part of such an amazing event. I envision a time when every day is filled with such brilliant connections and a community making a difference in the world.

Please go to PWI and join a chapter near you or sign up for their educational teleclasses held on Mondays.

As founder of UBU I found my inspiration from my brother Tony who was a foster child, then adopted by my parents when he was five. After listening to his stories about the treatment he received while in the homes I began to think of what it was like for him as well as the thousands of other kids. I decided to start the school after Tony passed on in 2008. It is my tribute to him and all that he did for me. Of all the things I've done in my life, this is the one thing that truly makes me feel like I'm finally on the right path.
View all posts by Sharyn →
This entry was posted in Kids at Risk and tagged Inspiration. Bookmark the permalink.