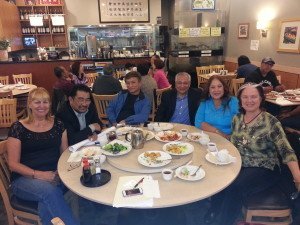 We met in San Leandro to  go over the plans and the duties of each of the team members as well as their previous experience.

Each of us had a chance to talk about our goals and direction for UBU and what we will be doing in Belize once the construction begins.

Our meetings over meals has helped us build our relationships and get to know more about each other before we end up on the site.

As founder of UBU I found my inspiration from my brother Tony who was a foster child, then adopted by my parents when he was five. After listening to his stories about the treatment he received while in the homes I began to think of what it was like for him as well as the thousands of other kids. I decided to start the school after Tony passed on in 2008. It is my tribute to him and all that he did for me. Of all the things I've done in my life, this is the one thing that truly makes me feel like I'm finally on the right path.
View all posts by Sharyn →
This entry was posted in Team and tagged Meeting. Bookmark the permalink.