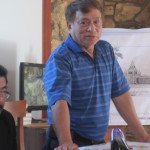 Rey has always been great about getting the team together at the house he’s been working at designing and constructing for the past 8 years.

Rey is preparing to move to the Philippines to start a residential community and a restaurant. He won’t be returning to the U.S. other than for visiting.The Phiippine Asian Society of Architects and Engineers (FASAE) has been extremely supportive of UBU so it was a lot of fun to see everyone who I haven’t seen in about six months. 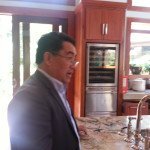 Lino is our Project Manager and will be the glue that holds us all together. I met Lino through FASAE in January 2013 just after we had been told we had been approved for funding.

Lino and I have spend many evenings going over plans and strategies. He is always a lot of fun to work with and we’re both looking forward to Karaoke nights once we’re in Belize. We’ll be sure to include the video from our musical nights as I know they will be very entertaining. 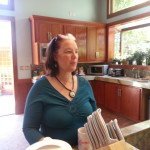 Robin has been a great support in the planning of UBU. She is always the perfect sounding board for me no matter what comes up. We’ve been friends for about 20 years and have seen each other through many ordeals. I have always been able to count on her unwavering logic.

She will be one of the Executive Liaison’s and act as co-secretary on the board of directors and is part of the First Responders Team. 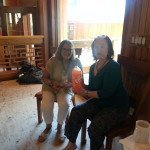 Robin, Kathy and I enjoyed the wide variety of food Rey had had prepared. He even had a roasted pig which was one of the best ones I have ever had.

Oddly we don’t have a chance to just sit back and talk since we living about 30-40 minutes apart.

Kathy will also be one of the Executive Liaisons during the first stages but then we’ll have Kathy move to the art department.

As founder of UBU I found my inspiration from my brother Tony who was a foster child, then adopted by my parents when he was five. After listening to his stories about the treatment he received while in the homes I began to think of what it was like for him as well as the thousands of other kids. I decided to start the school after Tony passed on in 2008. It is my tribute to him and all that he did for me. Of all the things I've done in my life, this is the one thing that truly makes me feel like I'm finally on the right path.
View all posts by Sharyn →
This entry was posted in Belize and tagged team. Bookmark the permalink.