In October one of my good friends and UBU Team member Robin Ramsey, strongly suggested I take a day off and head into San Francisco to take a break! 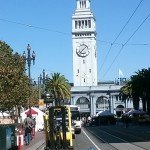 It didn’t take much encouragement, but not something I would have done on my own just for the heck of it. So I jumped on BART and took the 30 minute ride into the city getting off at the Embarcadero at the Port of San Francisco and took the historic walk, (more so since my grandfather Al did it every day from the time he was 12 until he was 18) to Fisherman’s Wharf.

I had a fresh crab at Boudin’s, of my favorite restaurants, listened to some great jazz at Sam’s and sang at the Gold Dust piano bar. A perfect evening for me. But it got better!

On the way back I noticed a group of young adults (20-25) just hanging out near Pier 39. I stopped to talk with them and they told me they traveled around planting gardens and doing what they could to help communities grow healthy food.

Of course I was impressed. You could tell they weren’t about to spend the evening at one of the pricey hotels at the Wharf and would be lucky to find a room at a hostel. I gave one of the young men my business card and suggested he give me a call.

Lo and behold, he called near the end of January but it was too late to carry on a decent conversation. But then he called again last week. He told me a bit about his background and his interest in growing hemp for product production. I gave him a short list of things to do and sure enough he did them!

So it is my pleasure to welcome Andrew Connant to our team as the Assistant Director of Hemp Farming. I am very impressed with this young man and look forward to getting to know more about him when we all meet up in Belize.

As founder of UBU I found my inspiration from my brother Tony who was a foster child, then adopted by my parents when he was five. After listening to his stories about the treatment he received while in the homes I began to think of what it was like for him as well as the thousands of other kids. I decided to start the school after Tony passed on in 2008. It is my tribute to him and all that he did for me. Of all the things I've done in my life, this is the one thing that truly makes me feel like I'm finally on the right path.
View all posts by Sharyn →
This entry was posted in Belize, Kismit, Team and tagged connections, Serendipity, sycronicity. Bookmark the permalink.