This infographic from the OECD Development Assistance Committee projects which countries will be home to the world’s poorest people by 2015, and compares this to the picture in 2005.

Part of their report Fragile states 2013: Resource flows and trends in a shifting world it reveals that by 2015, half of the world’s people living on less than USD 1.25 a day will be in fragile states.   And while poverty has decreased globally, progress on Millennium Development Goal (MDG) 1 to halve poverty is slower in fragile states than in other developing countries.

While India will still have the second largest population living in extreme poverty, the reduction from 2005 is incredible.  China is also projected to reduce poverty dramatically.  In Africa, Nigeria, Democratic Republic of Congo and Tanzania are predicted to have the largest populations living below the poverty line. 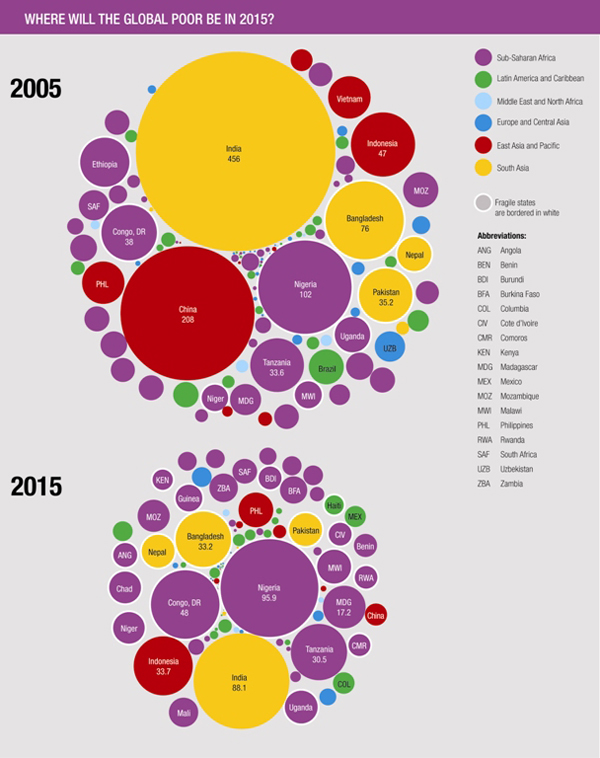 As founder of UBU I found my inspiration from my brother Tony who was a foster child, then adopted by my parents when he was five. After listening to his stories about the treatment he received while in the homes I began to think of what it was like for him as well as the thousands of other kids. I decided to start the school after Tony passed on in 2008. It is my tribute to him and all that he did for me. Of all the things I've done in my life, this is the one thing that truly makes me feel like I'm finally on the right path.
View all posts by Sharyn →
This entry was posted in World Poverty and tagged Trends, World Poverty. Bookmark the permalink.