During the past two years I have been exposed to a level of national and International political and economics few people are ever aware. The knowledge is typically shared among the elite and well educated. 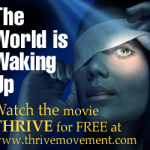 If we are ever to be able to live in a world where we can impact and reduce the number of people who are malnourished and impoverished, we have to eventually stand up and fight for what we want our world to look like.

Do we choose to be apathetic? Do we want to make a difference and have our life have meaning? Do we want to create a legacy or merely put in our time on earth?

The question is left up to you to answer.

I know when you watch the following film you will be challenged to continue your life as though nothing has changed. You will change after just this one film. And I hope it inspires you to do something to make this world a better place and to give your time here on earth more than just a sense of purpose.

As founder of UBU I found my inspiration from my brother Tony who was a foster child, then adopted by my parents when he was five. After listening to his stories about the treatment he received while in the homes I began to think of what it was like for him as well as the thousands of other kids. I decided to start the school after Tony passed on in 2008. It is my tribute to him and all that he did for me. Of all the things I've done in my life, this is the one thing that truly makes me feel like I'm finally on the right path.
View all posts by Sharyn →
This entry was posted in World Poverty and tagged Deprivation, Government Control, Hunger. Bookmark the permalink.