Have you ever done something and the whole world just seems to show up to support you. You have to know you’re on track when that happens.

The amazing thing about the school is everyone and everything seem to be in auto pilot.

I started the day early again. I decided to treat myself to a quick trip o San Pedro. I left the hotel at 8:30 to make sure I was on time for the water taxi that leaves at 15 after the hour.

My favorite cab driver, Kareem wasn’t there so I got a taxi ride from Phillip. He’s a musician-slash-taxi driver just like all the waiters in Hollywood are waitstaff-slash-actors. He was telling me how he’s tried to order a keyboard for two weeks but the store owner hasn’t had time to order it.

I told him that he could get the keyboard from eBay much cheaper than in Belize even after the shipping. He hasn’t heard of eBay but asked me to write it down for him. He told me about the music industry being in bad shape. They don’t have a studio to record their music and very few people can afford to support musicians.

I suggest he organize a music festival to raise funds to build a studio and help promote the local musicians. I suggested it could include musicians from Jamaica to the Caribbean and it could be an annual event.

He seemed open to the idea but like most residents here they need someone to organize and direct them.

So I thought of Phillip as my random act of kindness for the day. 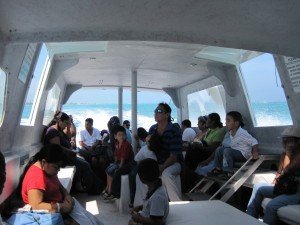 I boarded the ferry and we set off for San Pedro with one stop. The weather was perfect, not a cloud in the sky and the water was the most beautiful turquoise blue I had ever seen.

Everyone was very friendly and in a cheerful mood, although I have to say that is more normal in Belize than any where else I’ve ever been.

The difference between life in Belize City and San Pedro are night and day. San Pedro is clean, mostly comprised of tourist and what they need. The mode of transportation is primarily golf cards and the rental cojpanies are on every other block. It is obvious why US ex-Pats would prefer to live there.

The shopping was much closer to what I expected from the variety to the pricing. A blouse that was current with US trends was $22US compared to the store I was in last Saturday in Belize City that wanted $35US for a blouse that was at least 5 years old in style. Imagine how illogical that is considering the obvious extra cost of shipping goods to the island.

I would have liked to spend the night there and explored a bit more of the island, but I was ready to leave within a couple of hours.

Intuitively I headed back towards the docking area and a restaurant that has outdoor seating. I sat next to a woman and where she was from and she told me Chicago. She has a house on San Pedro and is doing what she considered major remodeling. Since she has been coming to Belize for more than 12 years, Emelda has many friends, including Shaggy, the bartender. She even brings vitamins from Shaggy’s mother who lives in Chicago. Shaggy mentioned that he has been trying to get his mother to move there and he wants to build her a house. I mentioned the polystyrene concept and he  said he’d been looking into but couldn’t find anyone. I told him I’d introduce him to Nickole who John Acott, the realtor introduced me to and he was very pleased.

Emelda asked me some questions about why I was in Belize so I told her about the school and she offered to introduce me to her brother. s?he gave me his cell phone and told me to call him when I got back to the states. He’s very involved with the Rotary even in the US and he’s the head of the Atlantic Bank in Belize City.

This is certainly more than coincidence. I know UBU is meant to be. There are so many amazing people who have shown up to help and I an so blessed to have these amazing incidents continually happen for me.

I’ll be leaving tomorrow, but will continue the updates, and hopefully return to Belize in the next few weeks.