San Ignacio Countryside – Belize I got an early start today so I could head out with John Acott from ReMax to look at properties. We met in the lobby at 8:30 and I was pleasantly surprised he was not only on time, but early for our appointment. Just as much of a surprise, so was I. 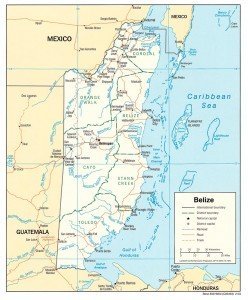 We immediately began to talk about the school and my plans and in less than 15 minutes he diverted our course into a construction yard to introduce me to a friend of his from Rotary who has a polystyrene plant. I’m very familiar with the concept and was pleased to find out, Nickole who is from France, is also manufacturing what he calls light concrete. It has beads incorporated into the concrete which allow the concrete to stay cooler and cool down much more rapidly than typical concrete.

After a great conversation, we were off and running towards our destiny of Cayo, about an hour southwest of Belize City. The countryside is beautiful. Lush greens and expansive open fields with rolling hills in the distance.

One of John’s greatest assets for me is he’s a Rotarian. He knows everyone I need to know and it seems they all belong to the Rotary.

Our first stop was to a lovely resort owned by Richard who is looking to relocate either to France or if he gets his way, India. It’s 70 acres with 3 2-story units, a main facility with a commercial kitchen, large swimming pool and open fields which which be perfect for the construction of the school and the outdoor sports fields.

The foliage is beyond beautiful which is due in part to Richard’s hobby of horticulture. He’s even growing kumquat trees which are very rare in Belize. I loved the quiet peaceful surrounding and it just happens to be next door to an agricultural university.

Next we headed further west to Bobby’s Wind Hill property which is a proper resort that he has built up over the 43 years he’s lived there. It is in pristine condition and as John pointed out, might be more cost effective by selling off lots even though it would be more than double Richard’s property. I’ve added video for both properties.

We stopped for a quick cold drink before heading over to the capital of Belmopan, 45 minutes north, where we grabbed a quick and delicious burrito and tostada. John had called yet another Rotarian friend Chris and we had an appoint with the Minister of Education. Chris printed out the application for the school and pointed out the requirements I’ll need to be aware of prior to building the school.

We did a quick run through Belmopan to stop at Beltraide so I could start the conversation with the Trade and Investment Development Service. John really knows the right people and I imagine he’ll be able to continue the introductions now that he knows what I am about to accomplish.

So in one day we accomplished more than the rest of the week combined!

I stopped at the bar for my daily diet Coke and a young man asked if I had found the Chamber of Commerce office I had asked about when John had dropped me off at 3 pm. I thanked him and said yes, but the chamber director was in a meeting and I didn’t get to meet her, but maybe tomorrow. I went on to tell him how difficult it’s been trying to secure appointments and he offered to introduce me to Patrick who is the Minister of Trade and just happens to be coning to the hotel tomorrow afternoon.

Yahoo! What a day!