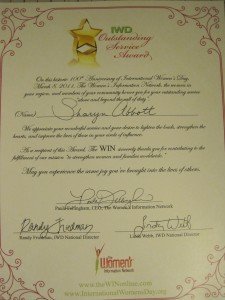 I just returned from the Women Information Network (WIN) event in San Francisco. There were about 100 women who attended the 100th Anniversary of International Women’s Day.

The award was for Outstanding Service and WIN will have our Ultimate Business University logo on their website for a year. It is a great way to have UBU recognized on a national level.

The more people who know about UBU, the more beneficial it will be for the school. It’s a bit like name recognition branding.

One of the attendees, Olga Aura was also in New Orleans last December when I received the Leadership Award from Powerful Women International.  Olga was one of the Olympic Gold Medal winners in Atlanta for gymnastics.

The experience of being surrounded by women who are making a difference in the world is more than a priviledge.

Valerie Bocage, the founder of Powerful Women International organized the event for the Bay Area. There were seven cities in the United States and 176 countries around the world who celebrated this amazing day of recognition for the women who have been brave enough to change the world for the generation of women to follow in their footsteps.

It is with great honor I have been included among their greatness.