Thanks to Esther Marc we now have an amazing Director of Security. Joe Gatlin (great name for security isn’t it?) has an impressive background in security, telecom and satellite systems. 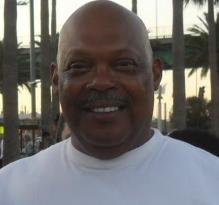 Joe has always been very active in his community including raising funds for the Barton Hill Neighborhood Organization. He is a San Pedro native, and has been the chairman of the San Pedro Juneteenth Committee. He has served on the Port Community Advisory Board was formerly served on the Toberman board of directors and was president of the Central San Pedro Neighborhood Council.

Joe will not only design our campus security to keep the children safe but he’ll make sure the staff and workers are safe day and night. He will manage a team of 300 security staff and act as my personal security guard.

His background is so impressive but I can’t tell you all the details since it’s top secret . . . smiles

As founder of UBU I found my inspiration from my brother Tony who was a foster child, then adopted by my parents when he was five. After listening to his stories about the treatment he received while in the homes I began to think of what it was like for him as well as the thousands of other kids. I decided to start the school after Tony passed on in 2008. It is my tribute to him and all that he did for me. Of all the things I've done in my life, this is the one thing that truly makes me feel like I'm finally on the right path.
View all posts by Sharyn →
This entry was posted in Team and tagged Security. Bookmark the permalink.