This is a concept I not only believe in wholeheartedly but practice every day whether in person or on the phone.

It is rare however when I pick up a newspaper let along enjoy reading an article from one. But yesterday I was pleasantly surprised to read of a story about a young local man who lost his job and his reaction was to go to a local grocery store and buy $600 worth of groceries for unsuspecting patrons.

I was so impressed I Googled his name, then his friend’s name who he jokingly says “ratted him out” and found a valid email address. The same day he answered my email and called me in my specified window of time the next morning. 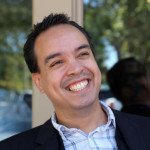 Michael Simas is indeed a local hero. He has the heart of a hero and has been living his passion of helping others since he was 18 years old. Such as life often does, Mike’s life unfolded in a unique way which dictated how he wanted to live his life.

Getting into trouble when his parents were going through their divorce was not a surprise to anyone including Michael. His father cleverly sent him to Portland to live with his aunt where she opted to put him into a rehab facility when she realized she was ill equipped to manage a disgruntled teenager.

By the time Michael was 18 he was wise beyond his years and grateful for the path his life had taken. He turned his upheaval experiences into becoming a minister for youth. He spent 10 years in Portland working with kids who were experiencing much the same trauma’s Michael had endured.

I couldn’t be more pleased to add someone of Michael Simas’ character to our team. He will be the Director of Teacher Assistants and will recruit, train and moderate our first group of 56 young teachers who will living in the dorms with our students.

Amazingly Michael has a passion for film and produced his first piece a year ago. He is now working with several noteworthy individuals in the industry and will be heading up our first International Film Festival in Belize.

Some say is luck, kismet, destiny or synchronicity and whichever you believe in, Michael and UBU were meant to be together!